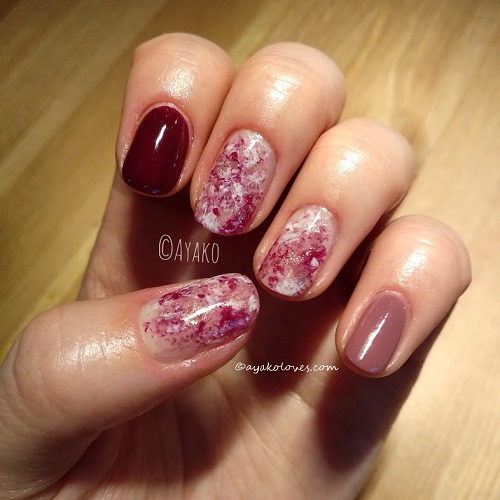 I did change my nails while I was “neglecting” my blog.
I have a few nails I haven’t share on my blog yet, so I’ll write about them little by little.

The last nails I did in September was “marble stone inspired nails”.

I used Essie for this look (except the fine gold glitters).
The colors I used are ‘In The Lobby’, ‘Island Hopping’, ‘Limo Scene’, and ‘Blanc’ by Essie.

‘In The Lobby’ (according to the official Essie website, it’s described as “Exotic cinnamon plum” Interesting!) is such a beautiful deep plum color. I believe it came in 2016. And I’m afraid it’s a limited edition since the official website said “not available” But I found it on a Dutch online shopping site called Bol.com. It’s almost sold out there, so if you can’t find anywhere near you, it might be a chance to get it. (Even though it’s a bit more expensive than the original price. I guess it’s hard to get now?)

‘Island Hopping’ is another beautiful color I often pick in sweater weather season. Essie describe this as “A rich plum mauve”. I had no idea this one was also “plum”! No wonder they go well together.
You can get it on Essie’s website, but I just realized it might be tough for people who don’t live in the US. (If you chose to buy it through the official website, you have 2 choices. Either buy it via Amazon or via Ulta.) For those of us who live in NL or in the neighborhood countries, again Bol.com might be the better choice. (This color is cheaper than ‘In The Lobby’ on Bol.com, but this one is almost sold out, too.)
‘Island Hopping’ anyone?

‘Limo Scene’ is one of my favorite ‘base color’. When I want a soft and subtle base color for nail arts, I often go for this one. It looks a lot more pink on both Essie and Bol.com though. This nail polish is more like jelly.I own a few bottles of ‘Limo Scene’ as back up.

‘Blanc’ is nice opaque white. (On Essie)
I’ve used ‘Alpine Snow’ by OPI before I got ‘Blanc’, but personally, I prefer Essie’s ‘Blanc’. ‘Blanc’ is actually less opaque compared to ‘Alpine Snow’. Because of that, I find it’s easier to control.
Are you looking for a white nail polish that is pigmented enough? Buy ‘Blanc’ here.

I used cling film to paint the marble stone inspired pattern.
What I had in mind was finer pattern, not the usual gray scale marble stone we see often. (I do like the typical marble stone pattern though!)

I hardly use cling film to do nail arts, so I need more practice.

That’s it for today!
See you next time!

iThere are no comments

Begin typing your search above and press return to search. Press Esc to cancel.